In a terse statement, the Bank of Canada maintained its benchmark overnight rate for the fifth consecutive meeting and stated that economy was performing in line with the projections in the Bank’s April Monetary Policy Report (MPR). Following a slowdown in economic activity late last year and in the first quarter of this year, the Bank’s press release said that evidence was mounting that economic growth was rebounding in Q2. “The oil sector is beginning to recover as production increases, and prices remain above recent lows. Meanwhile, housing market indicators point to a more stable national market, albeit with continued weakness in some regions.” The central bank was referring primarily to the weakness in home sales and prices in the Greater Vancouver Area.

The strength in the jobs market is an indicator that businesses see the deceleration in growth as temporary. Recent data show an uptick in consumer spending and exports in the second quarter, and business investment has improved. However, inventories rose sharply in Q1, which could dampen production growth in the next few months.

The recent escalation of trade conflicts between the US and China is heightening uncertainty and economic prospects. Also, “trade restrictions introduced by China are having direct effects on Canadian exports. In contrast, the removal of steel and aluminum tariffs and increasing prospects for the ratification of the new NAFTA agreement (Canada’s acronym for which is CUSMA–Canada-US-Mexican Agreement) will have positive implications for Canadian exports and investment.”

Inflation has edged up to 2% as expected, boosted by the carbon tax on gasoline.

Bottom Line: Overall, the Governing Council’s optimism that the economy is rebounding has been reinforced, although they acknowledged increasing global risks. The Bank’s future decisions will remain data dependent, and they will be especially attentive to developments in household spending, oil markets and the global trade environment. It is widely expected that the Bank will remain on hold at least until after the October federal election.

The central bank does not share the view of some economists that the economy is headed for recession and rate cuts are necessary. Today’s overnight rate remains below the Bank’s estimate of the neutral rate at about 2.5%, so barring a negative exogenous shock to the Canadian economy, the next rate move could well be to increase overnight rates, but not until after the election. 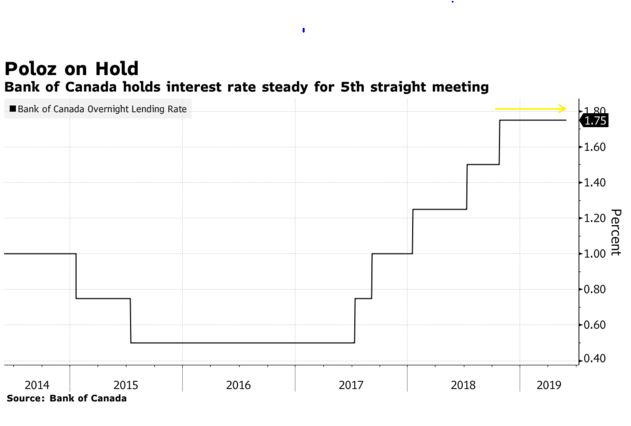